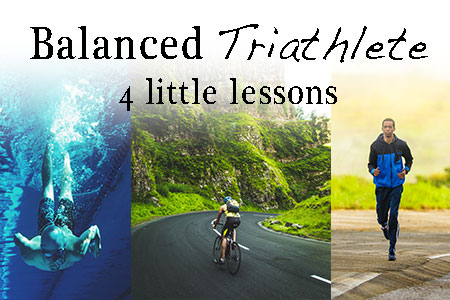 Go. Go on days you don’t want to. Push yourself in training. Don’t be afraid of speed or injury. Fear will hold you back from most everything in life. Fear kills. Even fear of taking a break, a day off to recoup. After all, your body recovers during those breaks and reaches its max potential at rest! The R&R is what builds and strengthens for the next workout, which tears muscles and pushes heart and body to health.

If you want to rest well and work out well you have to know, it’s gauging what you want in your fitness goals with what you need to get there. It’s all about balance.

Training With Others & Knowing my Limits

I learned that I’m not the best –that I need others encouragement, motivation, and advice to become a better triathlete. But in that, not everyone knows what my body feels. If I skip a morning workout because I worked my body too hard the previous two days, that’s okay. I know that the best way for me to grow as an athlete is by sharpening and honing my fitness from others around me –but as I ask questions and learn from others, I judge what’s best for more. It’s a balance.

I learned that I’m in control of my body. But my body is also in control too. I need to treat it well for it to do what I want. I need to drink more water, take in more plants- fruits and veggies, and protein, and I need to train my body in the moment, to work with my mind. Breathing, posture, and burning in my muscles all matter to keep pushing and not give up. I am in control. But as I have that control, I guide and train my body with gentleness and patience when it doesn’t do what I want on a “bad workout day.” I cannot let those days get me down. It’s a balance.

Saying “No” to People & Spending Time With People

I learned that I need to be okay with saying “no” to people, to events, to even family when it is important that I sleep and take care of myself as I push. I feel like I’ve learned that “no” word a few seasons in my life, and once more it matters as I drive through the distractions in life. So often I feel I don’t want to be left out of an event, or miss a hilarious “you had to be there” moment. But that just means that I prioritize the fear of missing out, over the reality that I need to take down time to perform at my highest potential. Saying “no” is a way to get that down time, so I can get to that early morning work out, feeling rested and good about it, instead of grouchy and upset all day.

But I don’t want to be one track minded –that the ultimate, most important thing is going to bed and working out early, with work and even second trainings in between. People matter. Events matter. Life outside of training matters. It’s a balance.

Rejoicing in the Triumphs & Continuing to Push

Lastly, I learned that I need to rejoice in the gains I have made, while determining where I still want to go. I swim fast and bike hard, but run slowly that my feet feel like they are dragging, THAT’S OKAY. Rejoice in the swimming and biking, and look forward to tomorrow when I can run again on a new day. Rejoicing in today, while looking forward to and planning tomorrow’s workout. It’s a balance.

Have you seen this ad?

Many words come to mind when thinking of the men and women who compete in the Olympics every 4 years. The night is a battleground for many who fight for their dreams of making it to the top. And for all that they put in, they deserve their 15 minutes in the light with hundreds of cameras and billions of eyes on them.

A piece of me is jealous of those who compete. And a piece of me wants to want anything as much as the athletes that go for the gold.

Then I pause and think. Wait. Don’t I have a reason to be like them??

I’m not the strongest, fastest, skinniest, or most athletic person out there. But don’t I have a reason to want to be the best that I can for Him? To give more, serve more, love when it hurts, and stand for what’s right? To take care of my body with fitness and nutrition? To work for my dreams, even if it means waking up early to write that next paragraph for my writing projects? To help with a film project that isn’t my own, so that I can begin stepping toward the goals He’s placed within me?

He sacrificed EVERYTHING for the sake that I might live, but I waste away half my days and nights in front of Netflix and Facebook. I sit in front of a screen that doesn’t see me. Doesn’t care for me. Doesn’t help me with anything except in becoming a cliché, inorganic daughter of the world.

Why am I not fighting tooth and nail for anything bigger than myself? Be it a gold medal in the spotlight at the Olympics or learning a new piano song in my living room, there is life to be lived and had, but sometimes I struggle to care.

It’s easier to eat food that comes from a box, rather than something I cook on my own. It’s easier to spend my money on clothes that will sit in the back of my closet, instead of giving back to the community around me. It’s easier to love this sacred screen, over volunteering at church or helping my Mom with the dishes that pile up behind me. And I’m so sick of doing what’s easy.

Do you know how counter cultural it is to act on being healthy? To act on giving more from my pocket than I keep? To act on wanting to glorify Him with my mind by picking up a book and reading, rather than passively listening the to buzz around me of new hit songs and the latest Hollywood (or political) scandal? I learned from the Bible that my body is a temple of the Holy Spirit and living God. Then why do I so easily give into the whims of the world around me with boxed food, Band-Aid medicine, consumer shopping, and couch potato entertainment?

I think in my conviction of my blasé attitude to the depth of passivity I see in my life, I wonder at the authenticity of others around me who claim Jesus, joy, and freedom all the while turning to the worlds doctors, psychologists, next form of entertainment, or giving into our seductive stores and “Quick Fix” “Feed Me” mentality of our consumer culture.

Back to the ad at the beginning. There is power in story and the athletes who compete in the Olympics have stories of defeat, wearing down, and tripping up. But they keep going no matter what because of the depth and passion within, that relentless pull to be the best version of themselves. So their stories are also stories of passion, driveness, working through the night, and fighting in the morning. They see the worth in continuing to grow themselves, not accepting defeat or a trip up at face value. And every 4 years, when all eyes and cameras are on the athletes at the Olympics, the world sees the fruit of the fight and stands inspired.

I am far from perfect. But as I stumble through life, I’m learning that if there is anything I can control- it is to not give up on this journey that God has me on, but instead to become the best version of me for His glory.

I want to “go for the gold” so to speak, not just on Sunday morning, but in the daily decisions of pursing dreams, pursuing relationships and friendships, making my physical and mental health a priority like my spiritual health, and living a life beyond the screens that I can’t seem to escape (which is ironic because I work in TV, but I don’t want TV to become my life).

Though I will fall hard sometimes, flat on my face imperfect as I am, I don’t intend to stay there. I owe my life to the One who bought it with His blood. He gives me an option of either being a passive, inorganic daughter of the world, or fighting to be the best as His daughter, living authentic in the world around me. When I fall, I have no excuse not to get up again, obey, and live, as He would have me. I’m letting go of passivity and choosing instead to go for the gold in all areas of my life, in order to best live in the Light.