I was bit hard by the travel bug when I studied abroad 3x in my undergrad days. But when I found out my dear friend Lauren, whom I met in Spain 5 years ago on one of these trips, was going to get her Masters in Columbia I was inspired by her love for adventure. She took study abroad to another level and learned everything from how Colombian’s put cheese in their hot chocolate to how medical interpretation is a way to help native Spanish speakers.

1) What school are you at in Columbia? Why did you choose that school?

I am in grad school at Universidad de La Sabana. It’s a peaceful, well accredited campus right on the outskirts of Bogotá, Colombia. I would mostly say God is the reason I ended up there.

2) What are you studying exactly?

I am studying “Pan-hispanic Linguistics” which is the fancy term for diving into the different dialects of Spanish spoken around the world in a certain pluralistic and inclusive approach. The extensive geography of Spanish speakers around the world calls for a certain tolerance and respect for those with different dialects. Without going too deep into the politics of things, basically Spain is not the norm to follow for “correct” Spanish, but rather each country has their own norms and nuances that should be equally accepted. This is a new direction of thought, but it is changing the politics of the language in beautiful ways. 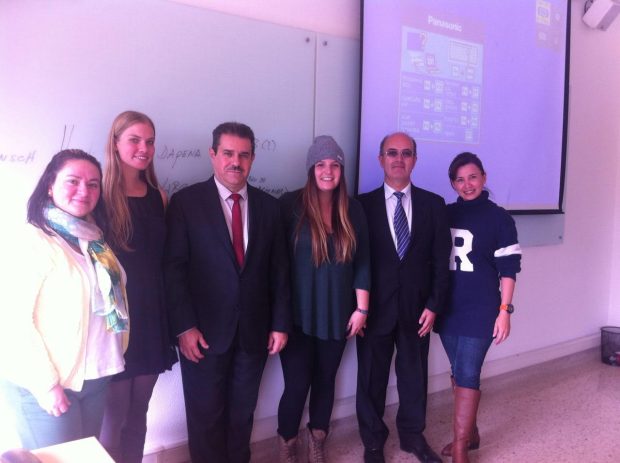 3) For your thesis, what was the process of deciding that different Spanish dialects could be an issue for medical translation?

I saw the issue of medical interpretation between different dialects of Spanish and American English while I was an intern at the Colombian Medical Academy… There are essentially endless amounts of Spanish dialects once you delve into the different regions, countries, cities, neighborhoods, and households of native speakers… Many countries in South and Central America are not up to the technological ease of access of info we have in the states. Since the vernacular greatly varies, we are doing a disservice to patients when we try to fit them into one box of Spanish speakers.

4) What do you hope to accomplish in the future with your new degree? Where do you see your Spanish medical translation taking you?

There is something very special about bridging the gap between cultures and languages that I absolutely cannot get enough of and I simply want to be an advocate for those who may struggle getting that help due to the language barrier. So for me, it’s simply an empathetic intention to serve others by relaying information between different languages. That is the kind of stuff that gets me excited.

As far as where I see this taking me, with more experience I would love to participate in mission trips or programs such as doctors without borders to help interpret in predominately Spanish-speaking countries.

5) Were you surprised by anything you learned during your 2 years abroad?

I was surprised by how I learned things. Though I think general knowledge is great, I loved being able to dive deeper into different aspects of the Spanish language, pragmatics, dialects, and so much more. I remember times when I would get teary eyed because I truly was so moved and excited about what I was learning!

There were a few surprising cultural things as well: people will not eat wings if they do not have plastic gloves on; they love cheese and put it on almost everything (even in hot chocolate) there are so many holidays, sometimes 3 a month; it is normal for people to interrupt someone being helped in line to get help faster.

I lived with a family my first year in Colombia and with other students my second year.

Living with a family definitely was a blessing in my adjustment because I got to learn some of the nuances with Colombian Spanish, cultural habits, and how to navigate in a big new city. The lady who owned the home was maybe 5 feet tall and 100% a firecracker who skipped lines and spent a long time getting ready. I got to try many authentic Colombian dishes while living with the family. Home cooked meals are always the best. The family I stayed with was my first community so I leaned on them a lot.

After being more established, I moved into a cheap place with 2 other girls I met at school in my program. I missed living with a family in a squeaky clean apartment, but I also enjoyed more independence living on my own.

7) What was your biggest struggle in moving to a new country and culture?

Community, connectedness, and patience in the process were my biggest struggles in the beginning. I lived abroad in Spain for 5 months so the culture shock process was not foreign to me. First you love everything, then you feel kind of sad and homesick, then you start to adjust. I do not put it lightly that I deeply struggled at first and often called my mom asking her what in the world was I thinking. What made that adjusting period the hardest was my lack of community at first. Before moving I felt bold and courageous for going to a place where nobody knew me, but whether it was a dose of humility or not, I quickly realized, shoot, I want people around and I don’t have to be courageous and bold all of the time. I struggled with not knowing anyone more than I thought I would, because I didn’t have anyone in my same frame of reference to relate my struggles with.

8) What is one way that your relationship with God has grown during this time?

Anytime I am out of my comfort zone God seems to feel more present in my life; it’s part of the reason I seek to be uncomfortable. I don’t like getting so settled and forgetting about leaning on God. Columbia was an amazing experience, but sometimes a lonely one as well. I had to invite God back into the role of being my best friend, my redeemer, and my strength.

I started practicing grace and forgiveness towards myself for little and big things. I tried to not worry so much about how my day would unfold, how exciting it would be, how unique it would feel, and I focused on living. I am still working on this last part (that seems to be a tough one for me!).

I am pretty good at being alone, but sometimes I just want people around. I think God showed me that my life won’t always be full of solo time, so it’s good to soak it up and learn about myself. I guess you could say I really tried to slow down and invite God into the nooks and crannies of my soul—some needed to be dusted off and shined, and some needed to be reorganized, but the beauty of cherishing alone time (even if it was too much sometimes) and inviting God into even the most simple days helped me grow stronger and closer to Him.