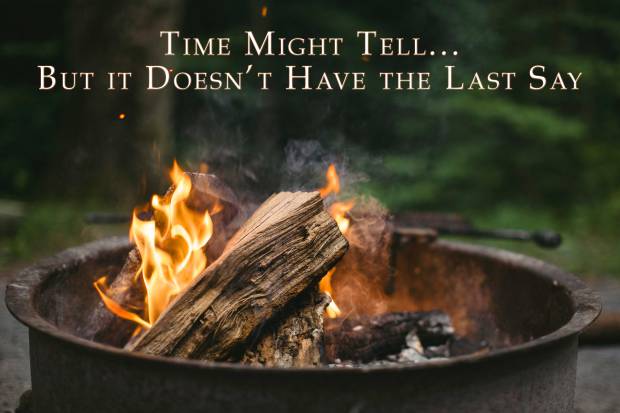 There is always something on my mind to write about, but lately, after a campfire and a death, I’ve been thinking mostly of time.

The passing of time. The ebb and flow as time brings us new experiences and change. How time makes everything seem the same.

I sat out by my campfire last weekend. My mom is moving to a new town, selling her home, and as I live with her I am moving too. Not with her, I’m getting my own place once more, but it is new change in my life as we move from summer to fall shortly.

As I sat by the campfire crackling on the warm summer night, I listened to the cicadas in the trees all around me, and night owls hooting here and there. I looked up to the sky that was black and full of glimmering stars. And I relished the heat of the rocks on my bare feet that surrounded the fire, keeping my toes warm as a breeze passed by.

I’ve been doing this since I can remember my first summer campout. The stars, black sky, cicadas, crickets and grasshoppers, lightning bugs… I’m older now, sure but there is timelessness to campfires that make me feel small, young like a child, and old like I’m 60 with the weight of the world on my shoulders all at the same time.

Time passes from person to person. Generation to generation. And in that time we only have so many days and hours to laugh, dream, plan, go on vacation, work, study, read, and make friendships and relationships with the people around us.

The campfire was a weekend ago but the death was a day ago.

The death of a beloved friend and coworker at my office at WPSU Sports. He was an encourager, leader, and hard worker. He laughed easily and worked swiftly. He was patient with me “the new girl” for a year, until the department started bringing in more people. He was a rock. I went to him for many things throughout the day. Advice on work, a break if I needed it, and help for any little issue that I wasn’t sure how to handle.

It’s hard to believe I will be walking into that office tomorrow, the next day, the day after, and even going to these fall Penn State Football games without him.

He reached out to me and made me feel included when I first joined the team last fall. He made my ideas seem relevant. We laughed at some of my questions. And even when he was stressed, he would hop over to my station and computer to help if I ever needed it.

Time is funny because though we’ve only worked together for a year he became a solid work friend in that time.

And he doesn’t even know it.

I never really told him how much he meant. Yes, a sincere word here and there, but nothing weird because I didn’t know how real to get with my co-workers and friends. Even after months I still felt like the new girl, which I haven’t been for quite some time.

This past Friday when I left the office he wasn’t around. (He had already left for a weekend wedding, which he told me about last spring! I remember that convo too… We were on a break in the lunchroom in April, talking about the weddings we were in this summer and friends getting married at our age. He told me he hoped the wedding that he was the best man wouldn’t be over a football weekend.)

Anyways, this Friday I was leaving for a triathlon, which he asked me all kinds of questions about the day before as he left for a wedding. I was going to text him, “Hey have fun at your friends wedding this weekend and good luck on your best man’s speech.” I honestly was excited to hear how it went come Monday. But I didn’t text him. Because I thought, “naw, I’ll see him Monday, I don’t want to bother him today.”

Time is short. Time changes things quickly. Because who knew that that Friday, one minute he would be breathing and the next gone.

And when did sending a positive note, thought, or word to someone ever become bothersome??

People need that. We need each other…

Moving from summer video shoots to plans for Football and Basketball season, I pictured him there… Helping me with the interns, offering advice when unknowns come up, and even after-work drinks as a team, which we never did.

And like sitting by a campfire at 25 years old instead of being 6 years old, though everything is different in life and work, everything is the same.

The shows and video shoots will go on. The first PSU Football game on September 3 will start without him. He won’t be there to edit, direct, or step in with our already short-staffed office, yet all those things remain the same.

Working in video seems glamorous, but for as much as I take behind the scenes photos of the lights, cameras, audio equipment, and fun sets, I sometimes forget the people around me. That time moves quickly and those people who run the sets are more important than the show we produce.

Time is final. Fatal. But also doesn’t end. Time moves on. And as it does, I hope to remember John… He’s one of the main reasons why I liked going to work so much. I love the content, sure, but I love the team I get to work with. Each person special. Each person with gifts, talents, and capabilities. But especially John who at such a young age did so much for the people around him and the office we worked at.

With the ebb and flow of time, the next days and weeks won’t be easy because John’s story, his life, will be missed. Is already missed. A death too soon. A life too short. And a friend of mine swept away in the current of time.

But he still matters. His soul is in God’s hands, mercy, and grace. And though “time will tell” it doesn’t have the last say.